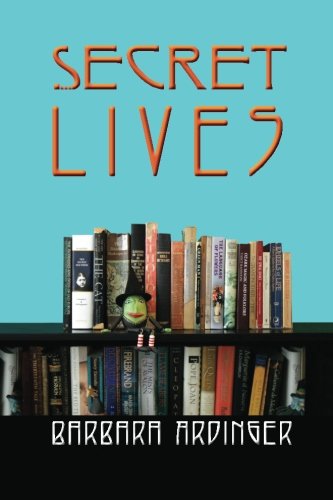 Night after night I savored Barbara Ardinger’s newly-released novel Secret Lives as a comfort and a treat. The women of the circle welcomed me in as I shared their concerns, their joys, their friendships and their wild and practical magic. Full of wit and warmth, Secret Lives deftly explores a host of timeless and timely issues and in particular gives us an original and compassionate view of older women. I am pleased to offer this interview with my friend and fellow author Barbara Ardinger, Ph.D. Welcome, Barbara!

I’m so glad to “talk” to you. We can share with your readers that I’ve reviewed all of Maeve’s books and I interviewed you (again via email) when one of them came out. I think that was in The Beltane Papers.

You are a prolific writer and have published many works of nonfiction. Is there a difference in your writing process between fiction and nonfiction?

I have the covers of all eight of my books in plastic frames in a column on a wall in my office. Seeing Solutions is about six inches off the floor. Secret Lives is three inches below the ceiling. I’m gazing at this “ego wall” as I write this.


My first book was Seeing Solutions, published as a mass market paperback in 1989. It was a book on guided visualization and more mainstream metaphysical than Goddess spirituality. Next came A Woman’s Book of Rituals & Celebrations (hardcover, then paperback, 1992 and 1995). New World Library asked me to rewrite the Goddess movement history half of it in 2000 as Practicing the Presence of the Goddess. The title says what it’s about. It’s going to available in a Kindle edition pretty soon. Goddess Meditations (1999) was the first book devoted to meditations on various goddesses, including goddesses that I identified with the chakras (up the column from the root chakra—Baba Yaga, Hathor, Oya, Kuan Yin, Sarasvati, the Cumaean Sybil, and Sophia). The book was, alas, taken out of print, but I still get fan mail from readers! I’d love to rewrite it and get it published again.


Next came my first novel, Quicksilver Moon (2003), which is about a coven of witches in Orange Co., where I lived when I first moved to Southern California, that is under attack by an extremist preacher. It’s very realistic … except for the Goddess-worshipping vampire who teaches the women to defend themselves and ends up killing the preacher. I could drive you to the site of nearly everything in the book (well, except for the scene in hell), and most of the characters live in houses where my friends have lived. And the vampire drives a friend’s car. Quicksilver Moon is set in 1999, and Rev. Donnathea, a minor character in Secret Lives, is a major character.


My next two books were nonfiction. Finding New Goddesses (also 2003) is a pun-filled parody of goddess encyclopedias with goddesses I made up. Like Chi-Chi, the goddess of feng shui, and her evil twin, Sha-Na-Na. Verbena, the goddess of wordplay. Chocolata and Vibrata, the goddesses of ecstasy. Pagan Every Day (2006) is a daybook with an essay for every day, including leap year and a year and a day. It’s not just for pagan readers, however; I also wrote about Christian saints, Jewish holy days, the Prophet Mohammad (on the same page as Le Petit Prince), and holy days of the Buddhist, Hindu, and other calendars. It’s in this book that I also named Miss Piggy as The Goddess of Everything, and I wrote a little prayer to Barbie


Hail, Barbie, full of grace,
Mattel is with thee.
Blessed art thou among dolls
And blessed are thy multitudinous accessories.
Holy Barbie, girlfriend of Ken,
Play with us now
And as long as plastic and fabric will last, amen.

You can see that I like parody as well as puns.

When I’m writing nonfiction, I do a lot of research, some online but mostly in books that I own. I pile the books around me and use Post-Its with notes on them for bookmarks.


I think our process for writing fiction is similar. I watch and listen to the characters and act as their amanuensis. But I’m in charge of the craft of writing! I’m in charge of syntax, punctuation, spelling, etc. Like Maeve, the characters in Secret Lives are real women—in their own magical reality, which is not quite this reality. Madame Blavatsky really is the famous occultist transmigrated. (I explain this in the FREE READER’S GUIDE on my website.) At the same time, the characters share characteristics with people I have known in this life. This is not schizophrenia. It’s magical realism. It’s how authors like you and me live and work. I remember that we talked about our craft while we walked around Greenwich Village when I was in New York a few years ago. We work very hard and (not to brag) we’re both very good at what we do. That’s ’cause we’re both fussbudgets.

When you began writing Secret Lives twenty-plus years ago, what moved you to write about a circle of older women many of whom live in a residence for senior citizens? Though your age remains a mystery and indeed you may not have aged at all, do you feel that your vision was prescient? Did you do much rewriting for the newly-published version of Secret Lives?

Who can remember twenty years ago? I have two or three versions of the genesis of Secret Lives. That was about the time Barbara Walker’s The Crone came out, the first book on the subject, and Caroline Harrison (a professor at the Claremont colleges) had just invented the croning ceremony. Also Jessica Tandy had just won her Oscar (at age 80) for Driving Miss Daisy and The Golden Girls was popular on TV. (For more information, see the FREE READER’S GUIDE on my website.)


I took a class on crones taught by a member of Long Beach WomanSpirit (a real organization that is mentioned in Secret Lives). Some of the women in their twenties and thirties kept insisting that “crone is a state of mind.” (And just this year, women in a Yahoo group I belong to said the same thing.) This is nonsense! It devalues older women. I got so mad, I did research and learned that “crone” comes from a Dutch word meaning corpse. About the same time, my first literary agent suggested that I try fiction, so I wrote some short stories about older women. My agent sent the first version of the book to an acquisitions editor at Harper & Row. (This was before Rupert Murdoch bought the company.) The editor wrote back—I have the letter—that she loved the book, but that no one would ever want to read about old women. We still pretty much face that bias. Just look at almost any female on TV, even many of the anchorgirls. The ideal woman is age 19, size 1.

I was 50 then. I’m 70 now. But I’ve heard people say that 70 is the new 50. Maybe so. I’m about as old as Herta, Cairo, and Margaretta now, but even twenty years ago I was hearing that older women don’t feel old. That’s certainly true of the women in Secret Lives. After all, I even wrote an octogenarian sex scene! Was I prescient? I believe I was describing a little-known reality that is coming into greater popular awareness now that the boomers are aging and retiring. I think that today older women have permission—as if they need it!—to act any age they want to.


My second and third literary agents also tried to sell Secret Lives, but none of the big NYC publishers would touch it. Finally, in April 2011 Sherry Wachter said she wanted to typeset and design the book and help me take it to CreateSpace. Bless her! When I first wrote Secret Lives, I lived in Orange Co., but I moved to Long Beach in 1996, so when I decided to self-publish, I moved the women to the historic Rose Park neighborhood in Long Beach and rebuilt the Center Towers on the corner of Temple and 10th Street, a real corner. I also did another edit of the whole book, let my son (who holds an M.A. in English) go through it, and then asked another sharp-eyed friend to read it. She’s the one who found Ralph Lauren spelled Ralph Loren. Nobody had seen that before! Then I sent it to Sherry, who turned it into a beautiful book. My daughter-in-law made the little witch for me and took the cover photos of my real, actual bookshelves.

Thank you, Barbara! Readers, part two of this interview is coming soon with more information about the lively cast of characters is Secret Lives and the author’s powerful motivation for revealing them. Meanwhile, do visit Barbara Ardinger at her website and check out her Facebook Secret Lives page.

Elizabeth Cunningham is best known as the author of The Maeve Chronicles, a series of award-winning novels, featuring a feisty Celtic Magdalen. All the Perils of this Night, the sequel to her debut mystery Murder at the Rummage Sale, is forthcoming in 2020.

A Childhood in Narnia

Getting #Married: an interview with Meredith Gould (@MeredithGould)

Elizabeth Cunningham is best known as the author of The Maeve Chronicles, a series of awardwinning novels, featuring a feisty Celtic Magdalen. All the Perils of this Night, the sequel to her debut mystery Murder at the Rummage Sale, is forthcoming in 2020.