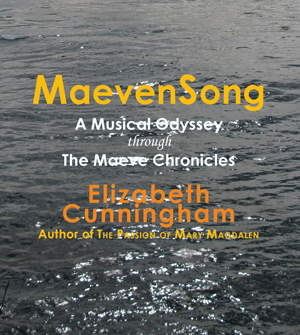 The musical single malt essence of The Maeve Chronicles, a series of novels featuring the feisty Celtic Magdalen, who ain’t nobody’s disciple. But she sure can sing: Blues, bluegrass, gospel, jazz improvisation. No reading necessary. Songs say it all!

Elizabeth composed all the songs while writing and touring with The Maeve Chronicles. With these bare melodic lines, she went to Tennessee with singer-songwriter Tim Dillinger in October, 2009. Musical miracles unfolded at Mike Torino’s studio Colorblind Soul Productions. Dave Martin created guitar accompaniment on the spot, as did Ron Gilmore on keyboard. I am deeply grateful to these game and gifted musicians. All the harmonies were composed and sung by Tim Dillinger with singer-songwriters Pam Mark Hall and Jerry Chamberlain joining us in the choral version of Thou New Moon. Mike Torino not only served as sound engineer but also as musical director. All percussion is by Mike. He also composed a new tune for the third verse of The Ballad of Black Sarah.

I was told Elizabeth Cunningham was unsure she could translate her feelings to pianist, Ron Gilmore; but she had only to sing, for him to fully understand. Likewise, the listener of MaevenSong has only to listen and to feel. I found this cd affecting on many levels. Elizabeth has been able to bridge many planes: her sophistication as a modern woman of the world is obvious from the moment she sings the first few words; there is real power and passion in her voice, not unlike the great blues singers of old, and in her spiritual world, one feels that she is planted firmly in intuition and worldly wisdom of the ancient ages. A refreshing listen from one full of surprises, I was drawn in by the intensity and the conviction of Elizabeth as poet-warrior, and I am swept by the breadth of emotion in MaevenSong.
Susaye Greene, The Last Supreme

“Song to the New Moon”